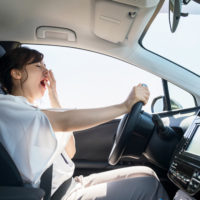 There are many different causes for auto accidents, and many different actors at whose doors they can be laid. However, one that does not often get discussed is the issue of driver fatigue. For both auto drivers and commercial truck drivers, fatigue is a factor that often gets ignored or pushed aside with the expectation of being able to manage, but in reality, it is a major contributor to auto accidents nationwide. If you have been in an accident and believe that fatigue might have played a role, you may be entitled to compensation for your injuries.

While it is difficult to obtain accurate figures on drowsy driving, the National Sleep Foundation reports that more than one-third of the adults they surveyed (roughly 37 percent of drivers) admitted to falling asleep at the wheel before, with four percent of that number already having sustained an accident directly attributable to their fatigue. The National Highway Traffic Safety Administration (NHTSA) estimates that approximately 100,000 crashes per year are caused at least in part by driver fatigue. European estimates, based on their crash reporting metrics that are generally more consistent than the U.S.’s, state that between 10 and 30 percent of all driving-related fatalities have fatigue as a component.

Statistics for commercial truck drivers also show that fatigue plays a role in accidents, even to a higher degree. Trucking companies will often push their employees to exert themselves beyond the safe guidelines propagated by the Federal Motor Carrier Safety Administration (FMCSA), and it shows – the agency reported that approximately 1 in 4 truckers admits to falling asleep behind the wheel, and while statistics only estimate the number of commercial truck accidents involving fatigue at around 7 percent, the agency also indicates that this is likely underreported.

If you have been in a car crash and you believe that the other driver was fatigued or even fell asleep at the wheel, you can bring suit against them under a legal theory of negligence. To show that the driver who hit you was negligent, you must show four things: (1) that they owed a duty of care to you and the other motorists on the road; (2) that the duty was breached; (3) that the breach of duty happened directly because of the driver’s conduct; and (4) that you sustained tangible harm as a result of the driver’s actions (tangible, as opposed to short-term; mere cuts and bruises are generally not enough, but broken bones and more severe harm will suffice). If a driver was drowsy, there is evidence that can be observed at the scene.

Auto accidents are among the most potentially deadly events one can experience, and if you have been through one, it is understandable to want to recover for what you have suffered. The Tampa car crash attorneys at the Rinaldo Law Group are experienced in these types of cases, and our attorneys are happy to sit down with you and try to answer any questions you may have. Call our office today for a free consultation.