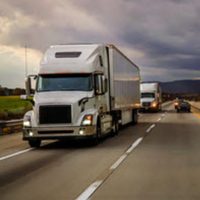 Large trucks are frequent sights on Florida roads, but too many drivers do not give them the respect they deserve. If a truck loses control, it can cause life-threatening injuries to those in any vehicle unlucky enough to be caught in a collision. If you have been involved in an accident with a large truck, you have the right to seek compensation from not only the truck driver, but also, potentially, from the trucking company, if certain criteria are met.

Truck Crashes Are In A League Of Their Own

According to the most recent available data from the Federal Motor Carrier Safety Administration (FMCSA), approximately 12 percent of all fatal crashes on U.S. roads involved a large truck or bus. In terms of fatalities, however, the majority were people outside the vehicle – in other words, people in other vehicles and pedestrians. Florida posted a low rate of fatalities per million vehicle miles traveled – 0.12, while other states saw as high as 0.49 – but this is primarily due to the sheer number of vehicle miles traveled on state roads.

There are several different ways that large truck accidents can happen, with many of them not having an analogue in terms of vehicle accidents, or resulting in far more serious injuries and property damage than would happen with two passenger vehicles. For example, jackknife accidents happen when the coupling linking a truck’s cab with its trailer fails or is knocked off balance, causing the vehicle to ‘jackknife’ across the road. Alternatively, a rear-end crash with two cars will often cause injury, but a rear-end crash with a large truck may result in the truck climbing onto the car itself, which will almost invariably result in loss of life.

Keep in mind that there is a statute of limitations on your right to file your negligence claim. Florida law permits a case founded on negligence to be filed any time within four years of the incident. There are rare exceptions which allow the statute to be ‘tolled’ – that is, held in abeyance, usually during a person’s minority – but in general, the statute will expire in four years. It may seem like a lot of time, but it can go by far faster than one might imagine.

Being in a vehicle accident is a serious life event; if you are unlucky enough to be involved in a crash with a large truck, your injuries can be even more serious. The Tampa truck accident attorneys at the Rinaldo Law Group are ready and willing to offer you compassionate and knowledgeable representation, navigating the legal process while you focus primarily on recovery. Call our offices today for a free consultation.