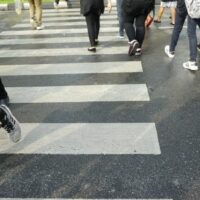 In July 2021, several new regulations related to bicyclist and pedestrian safety became law in Florida, after being passed in the previous year. Some of them include clarifying the definition of a “bicycle lane,” tightening the specific requirements for how to safely pass a bicyclist or a pedestrian on the road, and allows bicyclists riding in groups of 10 or more to go through intersections after a full stop. These are welcome steps in a state where bicycle and pedestrian accident totals are among the highest in the United States. If you are involved in a bicycle or pedestrian accident in Florida, you may be able to file suit for compensation.

Statistics from the Florida Department of Highway Safety & Motor Vehicles (FLHSMV) estimate approximately 16,400 crashes in 2019 that involved pedestrians or bicyclists, with almost 900 fatalities in that time. Metropolitan areas in Florida are seen as particularly dangerous for pedestrians, due to a lack of infrastructure like bicycle lanes, working crosswalks and blinking indicators to help motorists remember to yield. An urban planning think tank called SmartGrowth America ranks metropolitan areas yearly, and for nearly a decade, Florida cities have peppered the top ten.

In general, bicyclists have all the rights and duties that apply to any other vehicle operator on Florida roads. There are exceptions to this – for example, bicycle helmets are required for riders under a certain age – but nonetheless, this means that bicyclists are entitled to their rightful piece of the road. And yet, a motorist’s failure to yield is one of the most common fact patterns in bicycle or pedestrian accidents on Florida roads. If you have been injured due to a motorist’s failure to exercise due care, you have the right to seek compensation for your medical bills and damages incurred as a result.

Handled Via Insurer (Or Court)

Most bicycle and pedestrian accidents are based in the legal theory of negligence. In these types of cases, four criteria have to be established before an injured plaintiff can collect: (1) that a duty of care existed on the part of the defendant (in Florida, every motorist must exercise due care toward the other motorists on the road); (2) that duty was breached; (3) the plaintiff suffered tangible injuries; and (4) those injuries were caused directly by the defendant’s actions (or lack thereof), with no other intervening cause.

It is important to be aware that in Florida, most auto accident cases are not tried in court; rather, they are settled via insurance claim. Florida drivers are required to carry personal injury protection insurance (PIP) worth at least $10,000, and if two cars crash, each driver would file suit for their claims with their own insurer. If you are injured while on a bicycle or on foot, and you own a Florida car, you may be able to make a claim with your own PIP insurer, since the coverage travels with you, not your car, so to speak – but in some situations, you may also simply be able to file suit in court.

Being injured in an accident with a car, while you are on foot or on a bicycle, means that your injuries may be quite severe just because of the weight and speed differentials in the vehicles. Regardless, if you believe that your injuries happened as a result of someone else’s negligence, you have a right to seek damages from them. The Tampa pedestrian accident attorneys from the Rinaldo Law Group are ready and willing to try and assist you. Call our offices today for a free consultation.