Seeking Compensation For Your Motorcycle Accident 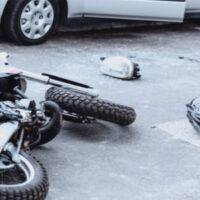 Motorcycles are a common sight on Florida’s roads year round, but this frequency can lead to increased accidents. If you are involved in a motorcycle crash in Florida, it can be easy to think that seeking compensation will be similar to doing so after an automobile crash – but in reality, there are differences in how motorcycles are handled under Florida law. Consulting an attorney well versed in these cases can help you understand what your options are.

There are very many different causes for motorcycle accidents, with varying degrees of culpability for all the actors involved. Drivers who are distracted, aggressive, or under the influence play a role in the majority of motorcycle crashes, because they are demonstrably failing to exercise any care for the welfare of others on the road, and a motorcyclist cannot generally predict their conduct. Violating traffic laws is another common reason that accidents happen; whether on the part of an automobile driver or the motorcyclist themselves.

It is important to keep in mind that in Texas, it is not a bar to recovery if your actions played a role in your own injuries, as long as you are not held to be more than 50 percent liable. Many people labor under the misapprehension that if they played any role in their own injuries, they cannot bring suit against anyone else, and this is not the case – as long as your percentage is not a majority (for example, 35 percent, as opposed to a majority at 60 or 70 percent), you have the right to try and collect monetary damages from the defendant.

Insurance Coverage Is Different For Motorcyclists

Normally, when a person is involved in an auto accident in Florida, they would use their personal injury protection (PIP) insurance to make sure their medical bills are paid. However, motorcyclists are not required to carry PIP coverage, and even if they carry it for their four-wheeled vehicles, it does not, by law, cover injuries sustained on a two-wheeled vehicle. You are required to carry your own motorcycle insurance. This does place motorcycle crashes outside the no-fault system, however, so if you have been injured and you believe you may have a worthwhile case against the other person, you do generally have the right to file suit against them.

If you have been in a motorcycle accident, it is important that you know you have the options to hold someone accountable. Whether or not you have insurance, you may generally file suit against a negligent driver or another actor that you believe may have played a part in causing your crash (for example, a manufacturer who sold defective parts). You must establish that the defendant failed to exercise reasonable care toward you, and that their actions (or lack thereof) were the direct cause of the harm you suffered. If you can put these points before the court, you have a good chance not only to prevail, but also to be compensated fairly.

Motorcycle accident cases can be confusing because they are not handled in the same way as automobile crashes in Florida. However, it is very possible to succeed in holding those who cause bike crashes accountable, and ensure that any medical bills from your accident are paid. Call the Tampa motorcycle accident attorneys at the Rinaldo Law Group today for a free consultation. We will work hard to protect your rights.