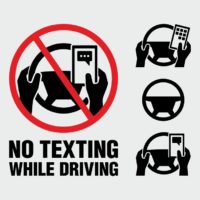 Florida is one of the few states that until recently, did not have an enforceable ban on texting and driving. However, one was passed during the last election period, and it is poised to go into effect on July 1, 2019. As the law comes into effect, it is understandable that people will have questions and misunderstandings will happen as law enforcement finds their proverbial feet. If you understand what the new law does and does not do, though, it may make your adjustment period a bit easier.

Some might recall that Florida did have a law on the books that restricted texting and driving even before the new ban was passed. The 2013 “Florida Ban On Texting While Driving Law” was signed into law by the previous governor, but was widely seen as unenforceable. The reason for this is that the 2013 law made texting while driving a secondary offense, rather than a primary offense, as the new law categorizes it. A secondary offense is something that a law enforcement officer cannot pull you over for – a driver can only be cited for a secondary offense if a law enforcement officer pulls them over for another, allegedly more dangerous behavior (even though texting while driving, as of this writing, kills more young people than driving under the influence).

This means that under the 2013 texting and driving ban, it was almost impossible to actually attach any consequences to texting and driving unless they were caught doing something else, like speeding or driving in a reckless manner. Given the amount of accidents caused or made worse by distracted driving, this was no longer acceptable to Florida legislatures, who passed the recent bill by overwhelming margins (only a total of 12 legislators voted no – 5 senators and 7 representatives).

How Harsh Is The New Law?

Some are concerned that due to this new law, law enforcement officers will be able to confiscate phones and GPS units, or that fines will be too stiff for people to pay. In reality, law enforcement may not access your wireless device without a warrant, and they cannot confiscate your device while waiting for one. In terms of fines, the initial offense is not particularly heavy; a traffic citation of $30 is the usual first-offender penalty, with the cost rising to $60 and higher for second and more repeated offenses.

One other important thing to note is that there were concerns floated by some lawmakers that this bill would be used as a crutch for racial profiling, particularly against African-Americans, and in order to combat that perception, the state will track citation data by race and ethnicity, with reports available in the following year. Thus, if you do get cited for texting while driving and you believe that it was for a non-objective reason such as race, you will have relevant statistics to fall back on to try and make your case.

Distracted driving is no joke, and tragically, it often leads to serious accidents with devastating consequences. The Tampa car accident attorneys at the Rinaldo Law Group are prepared to assist you in recovering the compensation that you deserve for your injuries. Don’t hesitate to reach out to us today for professional help with your case.